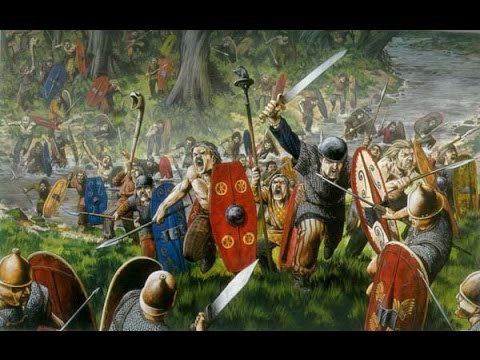 One of the lesser known aspects of Scotland's history is the role of the Picts. These were the tribal warrior tribes who were living in Scotland when the Romans arrived in the 1st century CE. We first hear of them being called the Caledonians who are said to have been defeated in a great battle by the Roman general Tacitus around the year 80CE. This of course is the Roman version, being nonliterate, the natives' side of the story has not survived.

What we do know is that the Romans left Scotland but came back several times, trying to conquer the Pictish tribes. These attempts were launched from behind the great structure

of Hadrian’s Wall, which was built in 120 CE and stretched across the north of England. Much of it can still be visited today as it was mainly built of stone. Another wall which lasted briefly between 142 and 167 CE ran from the river Forth to the Clyde and was called the Antonine Wall. Now the Romans tell us that these northern tribes were extremely good fighters and that they lost tens of thousands of men trying to conquer them. The Picts, along with their cousins the Scots from modern Argyll, even raided over Hadrian’s Wall, the best known example being in 360 CE when other tribes in Germany also drove the Romans back. When the Romans eventually left Britain in 409 CE the Picts disappear from history for a while. What seems clear is that they simply carried on living their own lives in what was a Celtic-speaking, tribal, pastoralist, warrior society.

For many years it was assumed that the name Picts had been given to these northern tribes by the Romans, but some modern scholars think they misheard a native term that was more like Pecht. The Roman form however stuck, mainly because it was written down and the Picts had no literature. One of the reasons for assuming the Romans named them Picti is because of Pictish Art. Pictish Art was hugely influential in what is known as Insular Celtic Art which flourished in the early Christian period in Britain. The world-famous Book of Kells was probably begun by Pictish monks on Iona, the heart of the Columban church before being moved to Kells in Ireland. There are also references to the Picts being tattooed, but this was a common practice throughout Europe at the time, so would hardly be a basis for naming them.

It is in the art though that the greatest influence of the Picts survives. They carved animal and geometric symbols on standing stones throughout the east and north of Scotland, some of these standing stones being from as early as the Bronze Age if not earlier. Much ink has been used up trying to analyse the early symbols of the Picts and they may well have incorporated aspects of pre-Christian belief and/or tribal totems. When the Christian monks arrived they incorporated many of these symbols and the stones themselves began to grow into wonderfully intricate relief sculptures that reflect Bible stories, though others may well hint back to other Pictish stories. What is clear is that the geometric and animal symbols of the Picts that pre-date the arrival of the Christians clearly show a highly stylised form of art which is truly naturalistic and suggests a long history of decoration. It is true to say that Pictish Art remains under appreciated and visitors today can see a wide range of examples in such places as the Museum of Scotland, Meigle Museum, north-east of Perth, St Vigean’s Museum by Arbroath, and at Groam House Museum on the Black Isle. Apart form these collections there are still many symbol stones still standing in the open countryside in various parts of the country, and others are preserved in local museums and churches. Nowadays many modern Scottish artists and craftspeople are inspired by this ancient art and their work can be found in many good quality shops in Scotland.

One of other aspect of the Picts that has been the cause of much scholarly discussion is their language. Nowadays it is thought that the majority of them spoke a language much like ancient Welsh and it is a remarkable fact that much of early Welsh literature is concerned with the Gwr Y Gogledd, the Men of the North, the ancient tribal peoples who inhabited southern Scotland and were, from the Roman perspective, Pictish. In fact the oldest ‘Welsh’ poem The Gododdin was written in Edinburgh. By the middle of the first millennium the Anglian kingdom of Northumbria, based in the north east of what is now England, was expanding and this forced the tribes of Scotland to become more organised through the need to resist the constant threat of invasion. It was in this period that we see the term Picts or even Pictland beginning to specifically apply to the lands north of the Forth Clyde line. The other Celtic-speaking tribes of southern Scotland were the Gododdin, who were in Lothian, and the Britons of Strathclyde whose lands stretched from north of the Clyde to Carlisle. Further west were the Scots of Dalirada who appear to have been closely related to the Picts though they spoke a different language, the ancestor of modern Gaelic.

The Picts fought off the Northumbrians most effectively at the battle of Dunnichen near Forfar in 685 CE and then resisted the incursions of the Vikings from the 8th century onwards and grew into a form of nation state or kingdom that was well established by the early 9th century. This state existed north of the Forth-Clyde line and merged with the Scots, and in time expanded south to become what we know of as Scotland today. Due to a variety of historical and literary pressures, the name Pict was replaced by Scots and the country got its present name. The Picts did not disappear though, they are an important part of modern Scottish ancestry and in the wonderful symbol stones that we can still admire today we can see that though they were ‘bonny fechters’ they were also artists of world class stature.