criticism: It has no place in a healthy, God-honoring marriage.

“Let no corrupting talk come out of your mouths, but only such as is good for building up, as fits the occasion, that it may give grace to those who hear.” - Ephians 14-29

And it’s not something that a healthy marriage

should allow to enter the walls of their relationship.  Criticism is deadly.

a zero-tolerance policy for criticism in  marriage is a great place to start.

When allowed into your marriage,

criticism will actively eat away at the intimacy

between you and your spouse

It’s a misuse of the unique position

you have in your spouse’s life.

When we enter into criticism,

we are misusing the position

we have with our spouse.

to build them up with our words,

we are choosing to tear them down. At its core, criticism is a betrayal of trust.

We’re choosing to attack the person

we have vowed to defend.

Criticism is destructive to your marriage

because it erodes intimacy

It is the glue holds spouse’s together,

a marriage will drift apart

until there’s nothing left

but a semblance of a relationship that used to exist.

When we criticize our spouse, we are taking advantage of the special access they’ve given us into their heart. That access is designed to help us become more intimate, to become one and love each other deeply. But when we criticize them, we are instead using that access to hurt them more deeply than anyone else can.  Engaging in criticism repeatedly leads to emotional pain

Criticism is an insidious behavior that comes into our marriage and eats at the core of our identity. Few things will shut down intimacy quite like being criticized or controlled, and it is capable of immobilizing your emotional health and personal growth, especially within your relationship.

is different than offering healthy feedback on a situation.

In order to isolate criticism,

When put next to each other, the differences are staggering.

“Let no corrupting talk come out of your mouths, but only such as is good for building up…”

Choosing to criticize your spouse actually says more about yourself than it does your spouse.

“Criticism is the only reliable form of autobiography,” ~Oscar Wilde

“Criticism tells you more about the psychology of the critic than the people he or she criticizes.” Dr. Steven Stosny

Repeated criticism often comes from a critical heart that is dealing with unresolved hurt.

“For the mouth speaks from the overflow of the heart.”  Mathew 12

Confronting criticism in your marriage has less to do with your words and more to do with your heart. Allow God to show you the value and love He has for you. Criticism can only be defeated when we do the work to heal the heart conditions that lead to a critical spirit.  Once we are confident of our value in Christ and the unwavering love of our father, it allows us to move forward without the need for criticism. For it no longer does any good for us to tear someone else down.  Imagine if the natural overflow of your heart was to speak encouragement to your spouse instead of criticism.

That could change everything.

use your position to encourage, inspire, empower, and love powerfully. 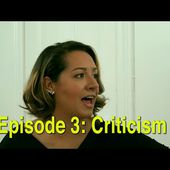 Criticism Sucks & Destroys Your Marriage! Learn the Power of the "Soft Startup"

You ever been in a situation where your spouse does something that makes you feel angry or frustrated? Or maybe you find that they keep doing something you d...