Today 13% of England is designated as green belt.

Only 2% of England is actually built on.

Given that there is a large need for houses to be built in England they could question as to the need for so much of the green belt.

The population of London is quickly increasing and will soon exceed nine million people where they should need at least a further new swathe of  houses of at least 800,000 units.

Yet there is no overall regional plan for this building only small local piecemeal wee plans.

Perhaps the politicians, developers, environmentalists and anybody interested  should sit down together and discuss the future and plans for what is the purpose and benefit for the Green belt, 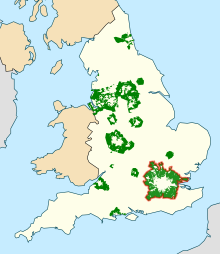 the green belt is a policy for controlling   building on nature and the countryside.

The idea is for a ring of countryside where building  will be resisted for the foreseeable future, maintaining an area where agriculture, forestry and outdoor leisure can be expected to prevail. The fundamental aim of the green belt  policy is to prevent lots of building  by keeping land permanently open, and consequently the most important attribute of green belts is their environmental benefit..

A  London green belt  was first proposed by the Greater London Regional Planning Committee in 1935.

then an act in 1947  allowed local authorities to include green belt proposals in their development plans.

In 1955, it  encouraged local authorities around the country to consider protecting land around their towns and cities by the formal designation of clearly defined green belts.

Green belt policy has been criticised for reducing the amount of land available for building and therefore pushing up house prices, as 70% of the cost of building new houses is the purchase of the land (up from 25% in the late 1950s).