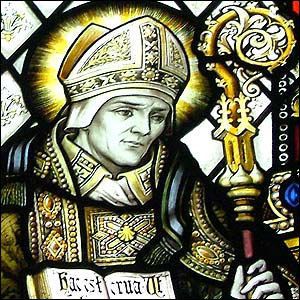 John Fisher is usually associated with Erasmus, Thomas More, and other Renaissance humanists. His life therefore, did not have the external simplicity found in the lives of some saints. Rather, he was a man of learning, associated with the intellectuals and political leaders of his day. He was interested in the contemporary culture and eventually became chancellor at Cambridge. He had been made a bishop at 35, and one of his interests was raising the standard of preaching in England. Fisher himself was an accomplished preacher and writer. His sermons on the penitential psalms were reprinted seven times before his death. With the coming of Lutheranism, he was drawn into controversy. His eight books against heresy gave him a leading position among European theologians.

In 1521, Fisher was asked to study the question of King Henry VIII’s marriage to Catherine of Aragon, his brother’s widow. He incurred Henry’s anger by defending the validity of the king’s marriage with Catherine, and later by rejecting Henry’s claim to be the supreme head of the Church of England.

In an attempt to be rid of him, Henry first had Fisher accused of not reporting all the “revelations” of the nun of Kent, Elizabeth Barton. In feeble health, Fisher was summoned to take the oath to the new Act of Succession. He and Thomas More refused to do so because the Act presumed the legality of Henry’s divorce and his claim to be head of the English Church. They were sent to the Tower of London, where Fisher remained 14 months without trial. Finally both men were sentenced to life imprisonment and loss of goods.

When the two were called to further interrogations, they remained silent. On the supposition that he was speaking privately as a priest, Fisher was tricked into declaring again that the king was not supreme head of the church in England. The king, further angered that the pope had made John Fisher a cardinal, had him brought to trial on the charge of high treason. He was condemned and executed, his body left to lie all day on the scaffold and his head hung on London Bridge. More was executed two weeks later.

Today many questions are raised about Christians’ and priests’ active involvement in social issues. John Fisher remained faithful to his calling as a priest and bishop. He strongly upheld the teachings of the Church; the very cause of his martyrdom was his loyalty to Rome. He was involved in the cultural enrichment circles as well as in the political struggles of his time. This involvement caused him to question the moral conduct of the leadership of his country.

“The Church has the right, indeed the duty, to proclaim justice on the social, national and international level, and to denounce instances of injustice, when the fundamental rights of man and his very salvation demand it” (Justice in the World, 1971 Synod of Bishops).