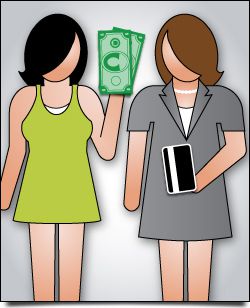 A CASHLESS SOCIETY
Is it a question of  control?

Where then does it exist?

A cashless society lacks banknotes  and  coins, instead has digital information as a representation of money.

There are an increasing number of cashless payments in some countries, nearly half of financial transactions in USA are cashless

A banknotes society is often associated with criminal activity, counterfeiting, or tax evasion.

However the cashless society is associated with a totalitarian survellience of control.

One in seven in Britain no longer carry cash, as they become reliant on card and smartphone payments, most do not have a wallet or a purse and fear that notes and coins will become obselete.

It now seems that  there is a dual society  where cashless exists  alongside traditional cash in many countries. Where some are attempting to push cash away in favour of electonic transactions.