WHAT IS SOIL COMPACTION, AND WHY IS DECOMPACTION NECESSARY?
·
Having too compact a soil is essentially the slow, strangling of your tree.

Often times, the warning symptoms of compacted soil go unnoticed; yet, ones that go unheeded can lead to serious consequences.

The natural soil a forest provides that is rich in nutrients (from leaves and fallen limbs) is often missing in the urban environment.

People surround urban trees with concrete, allow traffic over root zones, and limit the resources trees have to grow.

This ecosystem change most often leads to compact soil that:

– decreases the physical space available for roots to live and collect resources from, with less and less resources in that space

The optimum pressure of the soil is like the story of Goldilocks.  Not too soft, and not too hard.

Not too soft – Enough pressure in the soil is needed for stability to hold up the tree.

Not too hard – Allows pore space between the dirt to enable nutrient uptake and root growth.

Soil Decompaction is recommended when a tree’s soil is too hard.

Decompaction can be done naturally over several years by proper mulching and proper watering.  This allows beneficial microbes and organisms to break down the organic components, releasing nutrients from the mulch.  Earth worms and other organisms create space that will allow roots to venture out further.

Since the natural process of organic decompaction takes about 7 years, use of mechanical decompaction such as air injection significantly increases the amount of time the tree has to stabilize its natural balance.

Soil decompaction by air injection gives the potential for a better environment quicker and deeper.  We also choose air injection for very compacted soils, because it is non-damaging to all kinds of buried utilities as well as tree roots.   Shovels or pressurized water are not damage free tools.  A high pressure water jet can cut through boots, plastic gas lines, harm pipe coatings, and create mud further compacting soil, etc.

Soil decompaction is about creating a better ecosystem.  Decompacting hard soil will shift the tree’s root zone to a more aerobic, healthy, porous environment in which the tree will begin to thrive again. 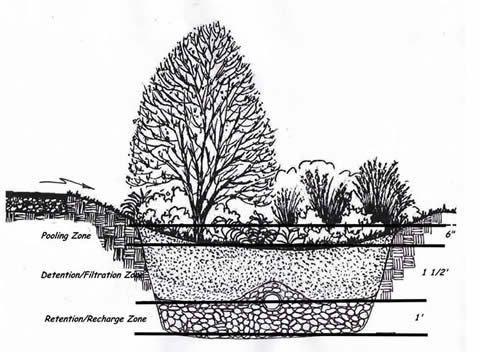 Within orchards or groups of similar samples, the abundance of apple roots  diameter was related to total soil porosity (Sta). Below a boundary soil porosity, roots were sparse or absent, and above this porosity, maximum root abundance tended to increase with increase in soil porosity. Depending upon soil texture, this boundary porosity varied from 29 to 39%. A previously derived model, which estimates boundary soil porosity (Stc) as a function of texture, accounted for most of these differences. If the model was correct, all boundary Sta – Stc values should have been zero and in four of six groups of samples the derived values were zero, + 1 or − 1. The greater departures from the expected in the remaining two groups (− 2 and + 4) may have been due to a tolerance of M. 12 rootstock to poor aeration and incomplete exploitation of potential rooting depth, respectively. With the exception of M. 12, apple roots were sparse or absent in samples with less than 10% air porosity at a tension of 100 cm (S100 cm). Poor development of roots in these samples was predicted by the model. In many samples with S100 cm > 10% there were few or no roots. Soil strength of many samples was within the range known to interfere with root development. For the purpose of recognizing a soil condition that will prevent apple root growth, Sta – Stc appears to be superior to the other criteria examined, i.e. Sta, S100 cm or soil strength.